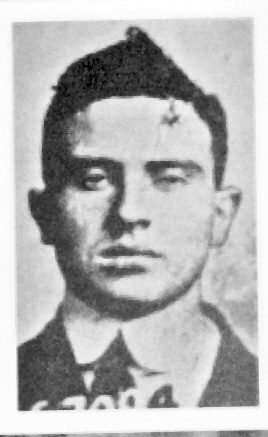 George “Red” Barker was a veteran slugger during the labor wars in Chicago. Barker had a long list of charges and prison sentences for everything from traffic violations to murder and gun charges.
Barker mixed with some of the heavies at the time Jack “Three Fingers” White, “Klondike” O’Donnell, Claude “Screwy” Maddox. His main partners in crime however were Mike Reilly, George Clifford, Frank “Si” Cawley and Thomas McElligot who all muscled their way into the unions, first the Coal Teamsters and the Hikers Union. They then set their sights on the Mid West Garage Owners Association but they were met from tough resistance by the boss “Cock Eyed” Mulligan.
One garage owner who wouldnt give into their demands was paid a visit by Barker, Clifford and Rielly at 858 Clark Street Chicago, they shot and killed a garage attendant working there and shot and injured a police officer who tried to arrest them. Barker fled Chicago to California, where he was arrested and brought back to Chicago to stand trial, however all three were acquitted when the police officer, who had initially identified the three but changed his testimony during the trial. Clifford and Reilly were set free but Barker was given one year for a parole violation, leaving the State. The police officer was given a month in jail for changing his testimony.
While Barker was in jail, George Clifford and Michael Reilly were drinking in the Pony Inn, the Pony Inn was the scene of a high profile murder of a state prosecutor William McSwiggin who had been drinking there with “Klondike” O’Donnell and Myles O’Donnell among others. In the Pony Inn, William Vercoe who was best described as a clown who would amuse his gangster friends, was fairly drunk this night and clowning around when he pointed at George Clifford and said “You’re a coward” to which Clifford replied “Who’s a coward” but before Vercoe could say “I didnt mean you” Clifford had shot and killed him in the bar.
Its believed that “Klondike” O’Donnell had had enough of Barker and his boys antics and decided to take matters into his own hands. In April 1929 George Clifford & Michael Reilly’s bullet riddled bodies were found dumped behind the Hawthorne Hotel. Following on from that in May 1929 Thomas McElligot was shot to death in a basement saloon, its believed some other gangsters were behind that move and the O’Donnell’s. In turn Frank “Si” Cawley was “taken for ride” in September 1929.
When “Red” Barker was released from prison and went back to trying to get back to gain control of unions. In June 17,1932 Barker was walking in front of 1502 North Crawford avenue when a machinegun opened fire. A total of 18 bullets hit Barker. Two men and a woman were with Barker when he was hit, miraculously none of the people with Barker were hit. The people with Barker rushed him to hospital but he was dead on arrival.
Police found a “machine gun nest” in a house across the street along with the murder weapon. There was speculation as to who was behind the murder, some say it was the Chicago Outfit on the orders of Frank Nitti but others say the Roger Tuohy gang pulled the trigger as revenge for the murder of Timothy Lynch who was the boss of the Teamsters and Chauffeurs union.
After Barker had been buried, he didnt rest in peace as on the night of 22 June 1932 a band of grave robbers turned up at Barkers grave and were disturbed by the care taker who asked them what they were doing, they replied with bullets but the caretaker also returned fire before the grave robbers escaped.

← Martin Brennan – First leader of the Gopher Gang The Crucifixion →