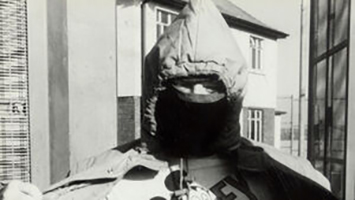 After the robbery of O’Connor’s Jeweler’s in Dublin in 1983 which netted Martin Cahill and his gang over £2 million Irish Pounds in gold, diamonds and other jewels, once the heat died down it was time to sell the haul. The O’Connor’s robbery was described as an impossible job but Cahill and his gang pulled it off.

The gang were put in contact with Les Beavis, a high profile “fence” from London’s West End. Beavis travelled to Dublin to examine and value the haul, he determined it worked at about 1,000 carats of diamonds and 3,000 carats each of sapphires, rubies and emeralds. Beavis being an experienced fence threw a figure of £50,000, to which he was greeted with laughter until they eventually agreed on a sum of £100,000. Each member of the robbery team received and equal share of the money.

Next came the gold that they had stolen, the gold weighed almost half a ton, each member of the crew also received an equal share who were free to do with it what they wanted. They came to a bargain with Beavis who agreed to buy their gold for £40,000 each. Some of the members of the gang used their money to buy drugs from a contact Beavis had in Manchester’s Quality Street Gang. Arrangements were made to transport the gold and jewels to England by hiding it in the door panel of a car and sent on a ferry from Cork.

Martin Cahill had a bag of gold of his own, which he made arrangements separately with Les Beavis to send over to England. Cahill had asked one of his men to arrange a middle man to transport the gold in a car, the middleman had no criminal connections and had legitimate business. The man Cahill had asked to arrange the transport, made his way to England separately with another of Cahill’s top lieutenants both were there to make the handover of the gold. However, when the car made it to the meeting point and the car door panel was taken off, there was no sign of the gold. The lieutenant made his way back to Dublin and reported to Cahill. The gang member stayed in London, he stayed there for about two weeks, which convinced Cahill he was guilty.

When the gang member returned to London, he went to see Martin Cahill to plead his case. Cahill didnt say anything, leaving the gang member unsure if he was believed or not but he wouldnt have to wait long to find out. Two days later he was going to find out. Cahill and the lieutenant that had been in London to oversee the handover of gold were waiting outside of the suspects house, the man had been out for the night and when he made his way home, Cahill and the lieutenant bundled him into a car and drove him to a derelict house.

They dragged the man to an upstairs room room they proceeded to question him and beat him, the man didnt give the answers they were looking for and he was then pinned to the floor. Cahill walked around him asking him the same question’s “Wheres the stuff?” and “Who did you give it to?” But each time the man gave the same answer “He didnt know what happened to it” and “He didnt give it to anyone”. Eventually Cahill began to staple the mans fingers to the floor, each time asking the same question and each time getting the same answers.

In all the ordeal had lasted 8 hours, Cahill gave him some cloth to wrap around his wounds as they helped him into the car and drove him to the hospital to get treatment. Cahill knew he wouldnt talk to the police.

Cahill would later admit that he wasnt proud of what he had done but “People remember pain” and “A bullet in the head is too easy. You think of the pain before you do wrong again”