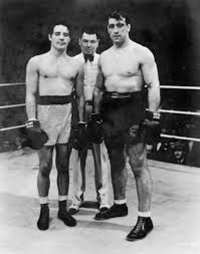 Nicknamed the Ambling Alp, Primo Carnera was a staggering 6 foot 6 inches tall, he boxed a total 103 fights, winning 89, 72 by knockout and 14 losses.

Nearing the end of of Prohibition Owney “The Killer” Madden entered into partnership with boxing promoter “Broadway” Bill Duffy. Between them, they controlled the careers of several boxing champions, including Max Baer and the massive Primo Carnera.

As Carnera’s manager, Madden arranged fixed fights which led eventually to Carnera’s winning the NBA World Heavyweight Championship in 1933. Carnera held onto the title for nearly a year, until reporters’ suspicions about fixed fights led Madden to desert the Italian strongman, setting up Carnera’s famous defeat at the hands of Max Baer, on June 14, 1934.

The referee was another former and famous boxer Jack Dempsey, who held the world heavyweight title from 1919 to 1926. He was also known as Kid Blackie and The Manassa Mauler. Dempsey became a referee after his succesful boxing career.