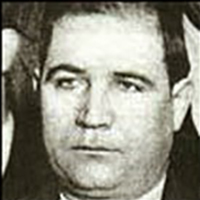 Klondike O’Donnell was a notorious mobster throughout the Prohibition Era. Joining up with John Torrio & Al Capone throughout the Chicago Beer Wars. William “Klondike” O’Donnell was once arrested alongside other top Capone associates, William “Three-Fingered Jack” White, Murray “The Camel” Humphreys, Marcus Looney, and Charles Fischetti, a cousin of Al Capone and one time bodyguard for Frank Sinatra.

There seems to be very little information about Klondike O’Donnell but it appears that he was present on the night of a famous shooting of a prosecutor William McSwiggin who was gunned down outside a bar in Cicero in 1926. On April 27, Billy McSwiggin left the home of his father, a Chicago police detective, and went with “Red” Duffy and a bootlegger named Jim Doherty.

Jim Doherty’s car broke down on the way and apparently they hitched a ride with “Klondike” O’Donnell, from there the four of them went drinking in Cicero and at some point met Myles O’Donnell and ended up at a bar named The Pony Inn, which was operated by Harry Madigan.

Outside the Pony Inn waited some gunmen in parked cars, as the drunken men staggered out the gunmen opened fire with machine guns and by the time they stopped McSwiggin and Doherty were dead.

According to the Chicago Sunday Tribune in 1934 he served time in Leavenworth for siphoning government whiskey out of Morand Brothers’ warehouse at 823 Norton street.