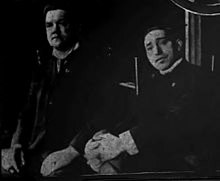 Jack “Eat ‘Em Up” McManus was born in Boston in 1862, McManus was seemingly destined for the underworld like his older brother, the international safe cracker, Kid McManus. Unlike his brother though, Jack earned a living with his fists from the beginning, eventually following his knuckles to New York City. McManus was a lightweight boxing champ and prizefighter, he was legendary for beating his opponents with his big hammy hands. McManus was also associates with Paul Kelly, the leader of the notorious Five Points gang.

Paul Kelly hired Eat ‘Em Up Jack as bouncer at Kelly’s Little Naples Café and New Brighton Hall. McManus had a rivalry with Chic Tricker a member of the Monk Eastman gang. One night Chic Tricker drunkenly wandered into Kelly’s club and insulted the showgirls. McManus stepped in, throwing Tricker out of the bar. During the scuffle, a challenge was issued later that night, Eat Em Up and Tricker traded pistol shots under the shadow of the 3rd Avenue Elevated Line, Jack put two slugs in Tricker’s leg and walked away unscathed. But Tricker swore revenge. The next day Eat ‘Em Up was walking through the Bowery. Just as he got to the corner of Bleeker Street, a burly hoodlum named Sardinia Frank stepped from the shadows clutching a gas pipe wrapped in newspaper and hit McManus on top of the head. McManus died in Belleview Hospital.