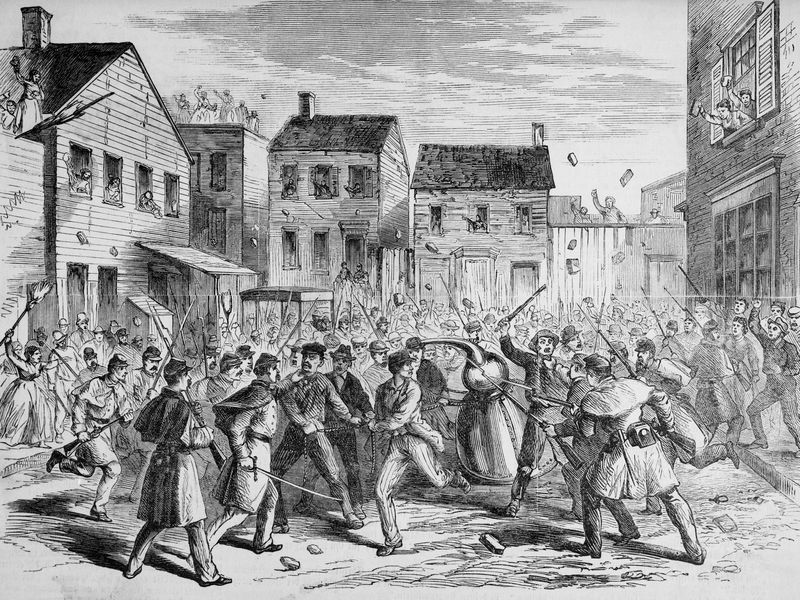 In the 1800’s and during the Great Famine of Ireland many Irish settled along the banks of the Brooklyn Waterfront, over time there were so many Irish living there it became known as Irishtown. Many found employment in the Navy Yard, on the docks of the waterfront and gas works companies.

In the late eighteenth century businessmen and developers Joshua Sands and John Jackson bought lands in the area. Sands manufactured ropes for merchant rigging and Jackson opened a shipbuilding company. In the hope of attracting Irish immigrants to the district, Jackson named his area after the site of the famous 1798 battle at Vinegar Hill in Enniscorthy, Co. Wexford.

Irishtown was more like a commune at the beginning and it was policed by the various gangs that existed within it. It wasnt long before gangs start forming in the area. Although Irishtown was similar to other notorious districts in New York, the Five Points & Hells Kitchen, Irishtown was known for having a code of secrecy like no other. It was infamous for its illegal whiskey distilleries and the many wars that were waged to defend them.

According to various news reports from the mid 1800’s Irishtown was an area of squalor and dire conditions, men couldnt find work or only part time work due to them being Irish or Catholics, women and children would often been seen begging for coal. Numerous shanty towns were dotted around the area, mostly consisting of just one small room.

These dire conditions caused many gangs to flourish and roam the area, they were not as well known as their more famous counterparts on Manhattan Island, but just as mean, vicious and violent. Probably the best known gang from the time were the White Hand Gang, who had such leaders as Dinny Meehan, “Wild” Bill Lovett & Richard “Peg Leg” Lonergan.

Some of the early gangs in Brooklyn had the colorful names and gang members as some of the Gangs of New York that we have covered in our stories on this page.

During the 1870s distilling whiskey and gang activity became such a problem for the city, the newly formed Bureau of Internal Revenue, the precursor to the modern day IRS decided to get heavy and enforce the law. By the end of the raids 20 whiskey distillery’s lay in ruins and whiskey ran through the cobblestones and pooled near the Navy Yard gate. Alleys were strewn with rocks, coal and scraps of wood.

On the morning of November 2, 1870, two thousand soldiers under the command of Colonel John L. Broome and guided by revenue assessors attacked the neighborhood, targeting whiskey distillers who were evading taxes on a colossal scale. Since the federal government couldn’t exactly audit the underground operations, it demolished them armed with muskets, axes & crowbars. In the attack, the troops marching down Dickson’s Alley, just 50 feet from the Navy Yard gate, were pelted by stones, bricks, and iron bolts thrown from windows or Irish Confetti as it was known.

The Whiskey Wars had been ongoing operation, with one of the first “battles” being fought in October 1869, when 100 army veterans found nine distillery’s after a violent knife-and-fist fight in an alley. The success of the raid led President Ulysses Grant to authorize more forceful raids, using the army and navy if necessary. The next battle came two months later, it included 500 artillerymen, who landed on the East River by tugboat. They axed barrels and spilled the contents, gushing onto the street, tubs that were discovered underground were pumped empty. By that afternoon they had destroyed stills that could produce 250 barrels a day.

This went on for over two years, but with law enforcement on the gangs payrolls, they were never taken by surprise. The proprietors, somehow, were not to be found nor were they deterred. When troops returned two months after the November 1870 raid with about 1,200 troops, the stills were belching again. Even when 1,400 soldiers stormed the district in 1871, they took just one still and no prisoners—clearly the whiskey men were tipped beforehand.

← A murder on the Brooklyn Docks ← The Distinguished Owen Vincent Madden of Hot Springs, Arkansas