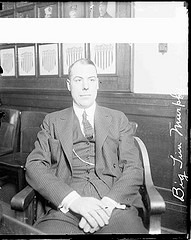 Timothy “Big Tim” Murphy. Big Tim was a pre-prohibition era gangster in Chicago right up until his death.

He was involved with armed robberies, labor racketeering, he had control of railroad, laundry and dye workers unions.

He was a mentor to another mobster / politician John “Dingbat” O’Berta.

Big Tim Murphy was shot dead as he answered his door in June 1928, a gunman blasted him in the head with a shotgun, he died instantly. His murder was never solved though there were plenty of suspects, some believe that gunmen associated with a rival, Mossy Enright were behind it, others believe Murray “The Camel” Humphreys was behind, while others think John “Dingbat” O’Berta could have been behind it.

O’Berta did marry Big Tim’s wife some months after his death. O’Berta himself was killed in one of Frank McErlane’s one way rides.

In a twist of fate, O’Berta was buried near Big Tim and when their wife Flo died she was buried in a grave between them