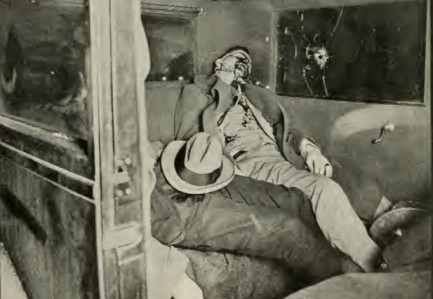 A Chicago gangland hit – The bodies of “Dynamite” Joe Brooks and Ed Harmening, supposedly a crooked cop, were found on 3rd October 1926, victims of Chicago’s Beer Wars. In gangland style they both shot twice in the face.

Ragen’s Colts were an early gang in Chicago, they started as a baseball team and developed into criminal activities and election violence. Throughout their time their membership grew to roughly 3,000 members.

However, there was a split in the Colts with some joining with the Ralph Sheldon gang and others joining with Westside O’Donnell’s under William “Klondike” O’Donnell.

“Dynamite” Joe Brooks and Ed Harmening had joined up with “Klondike” O’Donnell. Joe Brooks was a saloon owner and was a notorious member of the former gang Ragen’s Colts.

Not long before their final assassination, both Brooks and Harmening were attacked, when gunmen opened fire on them with a machine gun from a shed roof across from their club house, Joe Brooks had dived through a window to escape, Harmening wasn’t injured but a man named Charles Kelly died from gunshot wounds and several others injured.

Theories were rampant in the media as to why they were targeted. Some said it was in retaliation for an attempted hit on “Spike” O’Donnell, no relation to “Klondike”.

Another theory was it was retaliation for an attempted bombing of Ralph Sheldon’s cigar store. “Dynamite” Joe Brooks and Danny Stanton were believed to have been the “pineapple tossers”, pineapples being the gangland name for grenades.

The murder was in fact attributed to the Saltis / McErlane gang.