Farmer Sullivan gets whacked at dinner 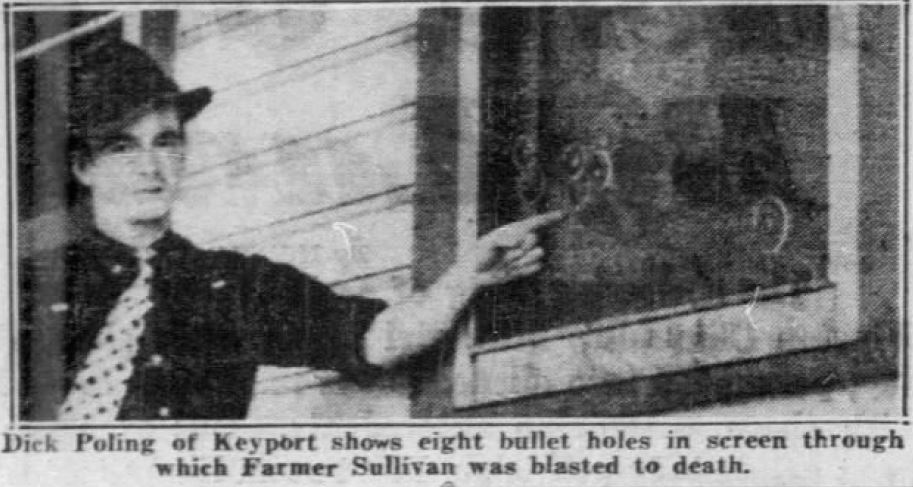 In the early days, before Eddie McGrath & John “Cockeye” Dunn were the big shots on the Westside docks, they joined up with a number of other criminals who worked the docks up and down the Westside. This loose collective of gangsters didnt have a formal name but the police referred to them as “The Westside Gang”

This “Westside Gang” were really two factions or groupings that decided to work together rather than fight it out. One faction was lead by Charlie “The Jew” Yanowsky and the other lead by Joseph “Big Joe” Butler. Joe Butler brought with him his longtime partner, Robert “Farmer” Sullivan.

Farmer Sullivan at the time was one of the most feared gangster’s in Greenwich Village, the nickname “Farmer” he got because he grew up around the old part of Greenwich Village in Manhattan. Sullivan was a former boxer both in and out of the ring, he had a what looked like a permanent smile on his face due to a scar on his face that ran from his lip to his cheek. its believed the scar was from a knife fight he had been involved in.

Over the years as partners with Joe Butler, Eddie Mcgrath and John Dunn, Sullivan had a tight grip on the rackets in Greenwich Village and ran his operation from The Farmer Sullivan Bar & Grill on Eight Avenue, from here he made a nice profit from the rackets. However a turf war between the factions had broken out in the previous years between the Yanowsky and Butler faction’s leaving bodies and shootings around the Westside.

As he was growing older, Sullivan found he needed a younger bodyguard, Robert “Barney” Baker, a young thug who met Sullivan when Baker was training to be a heavyweight boxer, Baker’s boxing career never really took off, ending with a record of 11 – 11.

On the night of 15th March 1936 “Barney” Baker, Joe Butler, “Farmer” Sullivan and a labor leader John O’Rourke had left a dinner for a member of the International Longshoremens Association. As they were walking down the street, O’Rourke, Baker and Butler were walking ahead of Sullivan, when a car rolled up from behind and two occupants of the car leaned out the window and opened fire with sawn off shotguns. Joe Butler was hit in the face and body, he was the intended victim, while Baker and O’Rourke were injured, Sullivan was was uninjured and Butler died later of his wounds.

Farmer Sullivan’s grip on Greenwich Village began to loosen as new groups began to move in, the Luciano Family’s Greenwich Village crew being the most powerful. The Luciano Family was being run by Vito Genovese, who was acting boss at the time, there was a lot of tension between Genovese and his right hand man Anthony “Tony Bender” Strollo, this resulted in warfare between the groups as they fought over rackets and a mutual hatred between the groups. Sullivan would rob, beat and threaten the numbers runners.

As the tensions were beginning to spiral out of control, Eddie McGrath, who was trying to tighten his grip on the entire West Side Docks wanted to make it clear that he had no part in the tension, reached out to his long time friend Vincent “Jimmy Blue Eyes” Alo who was now a Capo in the Luciano Family. Alo in turn reached out to Meyer Lansky, who said he would try to intervene. An agreement was reached that as long as Sullivan kept what he had and stopped his campaign against Genovese and Strollo there would be peace.

This didnt sit well with Sullivan who said “he would handle his own problems” and continued on with his campaign against Genovese and Strollo. Word was sent to Sullivan that the parties should sit down and work out peace, Sullivan agreed to it and a meeting was set for a quiet tavern in New Jersey on the 20th September 1936. Sullivan was sitting with his back to the window, witnesses said they heard a high powered car pull up outside and gunfire through the window. In all 8 shots were fired through the window, 7 of the bullets missed Sullivan but one hit an innocent customer, one bullet went through Sullivan’s heart and he died instantly.

Everyone who was at the table, the Italians and Sullivan’s bodyguard “Barney” Baker and a longtime friend of Sullivan and career criminal Tony Dillas had left the scene before the police arrived. Police found in Sullivan’s pocket, a notebook detailing business that Sullivan had done with both the major political parties hiring out thugs on election days to persuade undecided voters which way to vote. In his notebook he called these thugs “labor committee’s”, the notebook listed the prices and how many people were hired out in each county around New York.

There was nothing in the notes as to why the Republican campaign was five dollars less and didnt have a campaign manager, it didnt give any suggestion as to what type of work these labor committees did but authorities suspected that they were made up of “husky longshoremen”