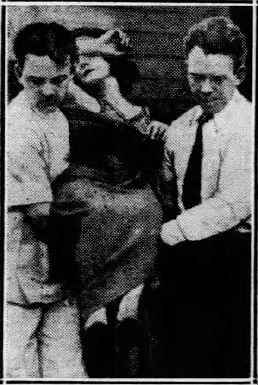 Jeanne McCarthy / Popke was the wife of Fats McCarthy, a triggerman for Vincent “Mad Dog” Coll.

Jeanne McCarthy was with her husband Fats McCarthy while they were on the run and in hiding between Manhattan and Albany and other parts of Upstate New York.

She was eventually caught along with her husband and Mike Basille, another Coll gangster and a criminal from Albany George Kelly.

After almost a year in hiding and evading police at every turn, the police finally got a break when they visited a store outside of Albany. One of the police disguised himself as a store clerk and followed Jeanne as she left the store and went back to their hiding place, a cottage.

A shootout between police and the gangsters say Fats McCarthy being killed, one of the detectives being shot five times, George Kelly was injured and Jeanne McCarthy was also injured by a stray bullet.

She is being helped to get medical assistance. Not much was heard from Jeanne McCarthy after.