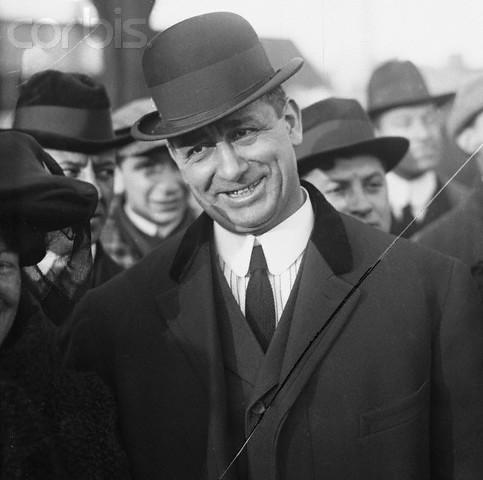 Lieutenant Becker was described as a hard man who stood over six feet tall, weighed two hundred and fifteen pounds, and according to one contemporary, “could kill a man with a punch.” Born in 1870 in upstate New York, he came to Manhattan in his teens and worked as a beergarden bouncer until he had saved up the $250 fee levied by Tammany Hall on all would-be policemen. He joined the force in 1893, and immediately established himself as a ruthless believer in the efficacy of the nightstick. But at last, in 1911, he was put on a strong-arm squad operating against the city’s gambling houses. He held the job only nine months before the Rosenthal murder, but piled up enough graft to buy his wife an expensive home in the country.

Herman Rosenthal was a gambler who had recently fallen on hard times and had begun complaining about the long-standing system of pay-offs between gamblers and police that kept New York’s riotous Tenderloin district running profitably. Rosenthal had gotten a young reporter named Herbert Bayard Swope to publish Rosenthal’s claim that a police lieutenant named Charles Becker was his partner in a gambling house. Now, however, Becker had shut it down because Rosenthal wasn’t turning over enough of the take.

On a July night in 1912 Herman Rosenthal was in the Metropole Cafe on West Forty-third Street in Manhattan, he had a copy of the New York World   “What do you boys think of the papers lately?” he shouted jovially to a group of fellow gamblers at a nearby table. “You’re a damned fool, Herman,” one replied. Around  2 A.M. a man entered the cafe and asked Rosenthal to step outside. As Rosenthal walked outside on the steps, four gunmen closed in on him. He took three bullets in the face and one in the neck.

Lefty Louie, Whitey Lewis, Dago Frank, and Gyp the Blood were seen to shoot him from their car, making no effort to disguise themselves. They were all tried separately, convicted, and sentenced to death. They were ultimately executed.

On July 29, 1912, Charles Becker was arrested by special detectives from the District Attorney’s Office. He was tried and convicted of first degree murder in a trial presided by John Goff, who was “intensely biased against Becker” and whose charge to the jury was slanted toward conviction. The verdict was overturned on appeal on the grounds that Goff had been biased, and that there was no independent corroborating witness to testify to the events as they all had been involved in the crimes.

There was a retrial, but in 1914 Becker was convicted again and sentenced to death. He was the first police officer in New York to receive this penalty.

Becker continued to profess his innocence. The day before his execution, Becker told the warden,

“Sure, I told them to put Rosenthal out of the way, but I didn’t mean they should kill him. I wanted them to get him out of town so he wouldn’t blab. Killing him was Rose’s idea and the others. They wanted to save their own skins.”