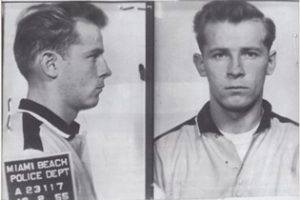 He had been living in Miami for two years and worked painting cars at Johnnie & Mack Auto Body Shop. The shop was well known in Miami with the slogan “Johnnie & Mack down by the track”.

The Miami Herald’s newspaper article on Bulger’s 1955 arrest indicated he was detained for robbing a jewelry store, Bulger stated that he was followed for suspicion of possessing stolen jewels.

A bank employee, who had watched Whitey Bulger open a safe deposit box, reported that he had a bag full of diamonds that fell onto the floor. She told the police that he was acting suspicious. Whitey believed that she had made up the story to give police probable cause to detain him.

At the station it was discovered that Bulger did possess stolen cash, but the police could not find any stolen diamonds. They ended up detaining him and his girlfriend on vagrancy charges. He was bailed out of jail and appeared before a judge a few days later. The judge dismissed the charges on the condition that the couple leave town immediately. They both left and went back to Boston.